Nothing illustrates the risky nature of property development more than the recent failure of the Steller Group.

The Steller Group was founded and operated by Simon Pitard and Nicholas Smedley, both second generation property developers and members of two of Melbourne’s wealthiest families. This was a group that played ‘large’. It often paid way ‘overs’ (up to 50% more than the valuation) on targeted properties. Its funding came from dubious ‘hedge funds’ and mezzanine lenders. Our interest is in some of the heritage properties Steller controlled or ended up controlling. 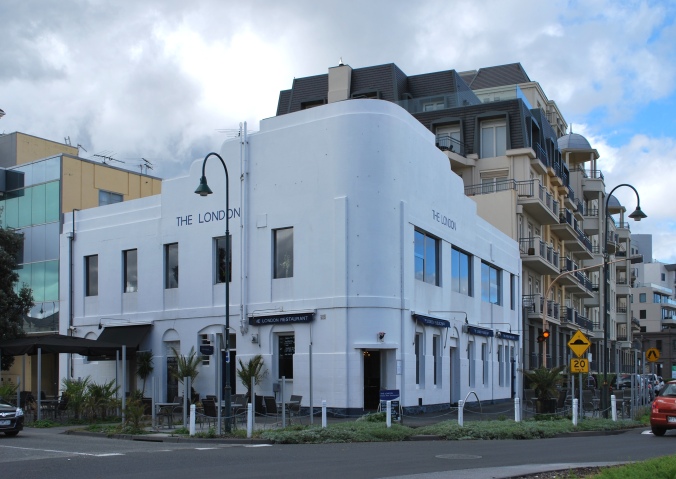 The issue with the Greyhound Hotel and the London Hotel in Port Melbourne was the narrow parameters used to interpret the Heritage value of both buildings. Renovations on both buildings in the 1920s and ‘30s saw the original buildings originally constructed in the 1850s drastically altered to reflect the Moderne/Art Deco style favoured at the time. In doing so the Heritage value – based on architectural merit – was minimal, according to the Port Phillip Council’s initial heritage report. Nevertheless the planned apartment complex was never built on the Greyhound site which was recently sold to recover debt by the Steller Group’s receivers. The London is still ‘under planning’ – another empty building site with big plans – so long as the ‘off the plan’ apartments can be sold. 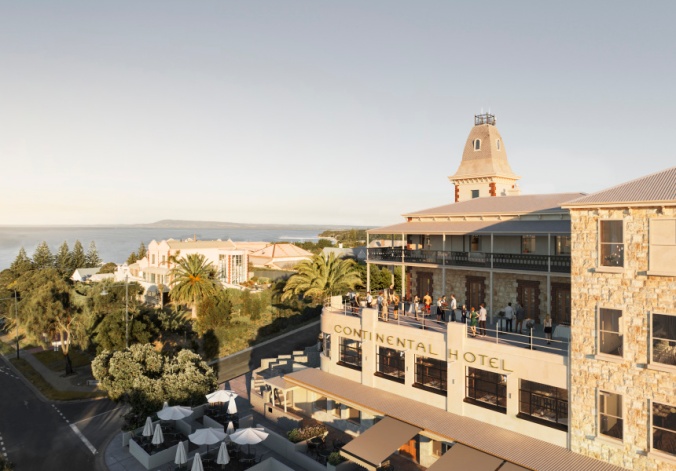 But the major ‘faux par’ of the Steller Group was its inability to contribute to the completion of the Continental Hotel, Sorrento’s refurbishment and re-development. The Continental has the highest ranking Heritage listing available. With Steller failing the whole Hotel stood to remain permanently incomplete unless alternative funding could be confirmed.

Here is its Victorian Heritage Database Statement of Significance.

The Continental Hotel in Sorrento was established in 1875, for the Sorrento Hotel Company under the directorship of comedian, politician, philanthropist and businessman George Coppin (1819-1906). The Continental Hotel is constructed in a simple Victorian Italianate style using locally quarried limestone. The Continental Hotel is a four storey building which includes the mansard roofed tower, return balcony on the upper levels and two storey section to the rear of the building. The building has undergone some major changes, with a Moderne style renovation to the street front of the ground and first floors which includes a roof top deck.

The Continental Hotel is of historical and architectural significance to the State of Victoria.

The Continental Hotel is of historical significance to the State of Victoria for its associations with George Coppin businessman, politician and entrepreneur whose enterprise was largely responsible for the development of Sorrento from the 1870s to the 1890s as a seaside resort. Coppin established a number of business ventures associated with the Continental Hotel such as the steamer service from Melbourne and the Sorrento tramway to encourage tourism to Sorrento.

The Continental Hotel is of architectural significance to the State of Victoria as a relatively intact example of the type of hotel development popular in the later years of the nineteenth century providing accommodation, entertainment and associated hotel services for wealthy city tourists. The Continental Hotel, constructed of local limestone, is important as a landmark building for the seaside town of Sorrento as it is situated on a prominent site at the entry to the town.

But Restauranteur Julian Gerner, the nominal owner and promoter of the Continental project, has seemingly managed a financial coup and expects now to complete the renovation and refurbishment program commencing early next year with new financial partners.

Hotelier in bid to restart work on Sorrento’s Continental Hotel

Redevelopment work on Sorrento’s historic Continental Hotel may resume early next year if hotelier Julian Gerner is successful in a bid to keep ownership of the $100 million project.

The Continental’s future has looked shaky since restoration work on the 144-year-old seaside hotel ground to an abrupt halt in May when joint-developer Steller ran into financial difficulties. 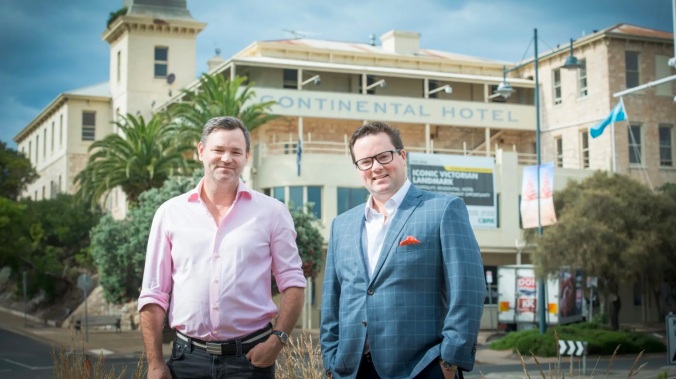 Restaurateur Julian Gerner (left) with Steller’s Nicholas Smedley in front of the Continental Hotel before the developer collapsed.

A recent attempt to sell the project to another developer LBA Capital for $21 million came unstuck when The Age revealed LBA’s director Demetrios “James” Charisiou had been accused in the Supreme Court of involvement in a sophisticated $400 million fraud against a Korean investment house.

In the Continental’s latest twist, Mr Gerner said on Thursday he intended to retain ownership of heritage-listed project following both the collapse of Steller and the failure of LBA Capital to settle on its purchase.

“I have negotiated an agreement to deliver on the vision to restore, renovate, protect and preserve the 1875 ‘Marvellous Melbourne’ hotel,” Mr Gerner said.

He hopes to restart construction on the four-storey limestone pub after Australia Day next year.

The hotel is now effectively a building site with a large concrete slab and has been sitting empty since Steller’s collapse amid an outpouring of concern from hundreds of frustrated locals seeking answers about its future.

It was built in 1875 and has the highest level of heritage protection due to its historical significance.

Mr Gerner said he had briefed Heritage Victoria and the Mornington Peninsula Shire after forming a new company, The Ocean Amphitheatre Company, to take control of the development.

Ocean Amphitheatre had negotiated an agreement with LBA Capital to be nominated to take over its contract of sale. LBA would take no further role in the Continental’s development, he said.

Mr Gerner said he would be approaching potential investors to fund the final $100 million in construction and acquisition costs.

“It’s a massive relief. I’ve got a couple of key high net worth individuals I will be targeting in coming weeks,” he said.

Title documents show the Continental Hotel site is mortgaged to three different lenders, a factor which could complicate Mr Gerner’s efforts to take control of the redevelopment.

Mr Gerner originally agreed to purchase the Continental Hotel from the Di Pietro family in 2015 for $12 million.

Around the same time, the local council sold him a neighbouring site at 23 Constitution Hill Road for $1.98 million.

He lost control of both sites when Steller unravelled earlier this year.

The Steller collapse has illustrated the risky nature of depending upon traditional property developers to refresh and renew such heritage properties.

This difficulty and the potential conflict of interests was noted in Britain decades ago. A Heritage Fund (based on funding from the Heritage Lottery) has been Government backed and in operation for decades. You can read about this innovative fund here heritagefund.org.uk/about

The wild world of laisse faire property development is most unlikely to satisfactorily protect our heritage adequately , if at all. The Victorian Heritage Council requires further and adequate funding to ensure timely inspections, local Government have a responsibility to provide up to date heritage database information for their areas to the Victorian Heritage Council and ultimately Heritage Victoria and the Minister for Planning Mr Richard Wynne.

It is obvious the system needs to be overhauled to provide failsafe protection for our valuable Heritage treasures. Heritage develops as our nation ages. It’s time to start genuinely valuing it and to do so we must ensure it is adequately funded.

These beautiful edifices and socially important properties need not be museums. With clever planning, architectural know-how and adequate capital, such iconic buildings can be preserved and protected for posterity, as useful ‘living’ entities. It really is time for a Heritage summit that addresses our approach to Heritage buildings, how we decide the merit of a building and then resolve what use is can be put to.

Or we can watch as more Corkman Hotels, more Greyhound and London Hotels, more modernist architecture, more Art Noveau/Modern buildings are simply demolished. Not to mention the early colonial mansions, Victorian Villas and other treasures currently under threat in inner Melbourne.

It’s time for decisive, inclusive action at State Government and Local Government level with key players and stakeholders such as the National Trust, the Heritage Council, Heritage Architects and property owners and developers included in the deliberations. It’s time to define what we now wish to call Heritage and how we can protect it over the next 20-50 years.

Or we can continue on the same path. And frankly that just doesn’t feel like a sensible option.