Back in the 1960s and ‘70s, if it was ‘old’ then it had little or no value. There was very little appreciation or understanding of heritage – whether it was architectural, historical, social or community based. The mantra was knock it down and build a nice new facility. Today we look at both ends of this spectrum, the ignorance of the past and the appreciation of present heritage values.

In 1972, the once powerful Victorian Railways was being usurped by Road Transport. Steam Engines were largely replaced by Diesel Locomotives, the main line from Sydney to Melbourne had been converted to standard gauge from broad gauge (track widths) enabling an express train to run without impediment between our two largest cities.

What was actually happening though was rather sad. Branch lines were neglected or closed. And the substantial buildings that had served the public for many years were either demolished or repurposed in renditions of the architecture of the times. People drove cars, cars needed carparks. The old steam locomotive infrastructure paid the price. Buildings were demolished, tracks removed.

But the real travesty was the destruction of what were in effect community assets – the actual station buildings.

Benalla was a good example. 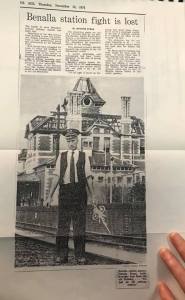 The battle to save Benalla’s historic railway station has been lost.

Demolition of the 19th century brick building is now well advanced, despite strenuous opposition from a local preservation group and intervention by the National Trust.

Both groups have struggled for years to retain the building-former refreshment rooms and tower section of the station-claiming it has architectural and historical significance.

But a railway wrecking crew moved in several days ago.

The chairman of the National Trust (Mr. Rodney Davidson) has called on the Premier (Mr. Hamer) to halt the demolition.

The demolition marks the end of a 14 month fight by the Benalla Railway Preservation Society-an offshoot of the Benalla Tourist Association-to save this dilapidated yet impressive section of the building. 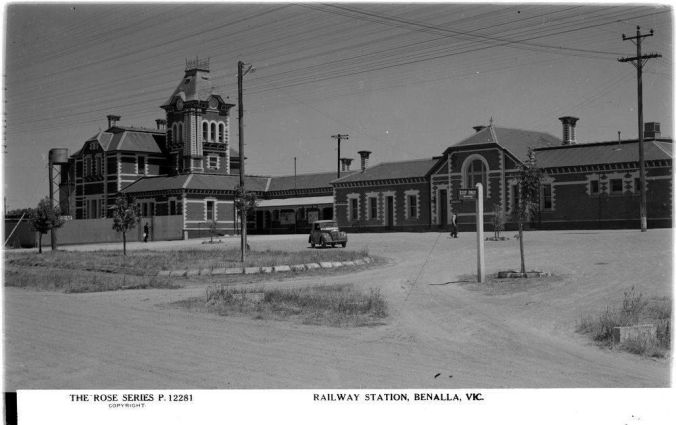 They planned to build a $60,000 museum-type complex in the old refreshment rooms.

A society spokesman said townspeople had been “totally apathetic” to the idea of saving the building. 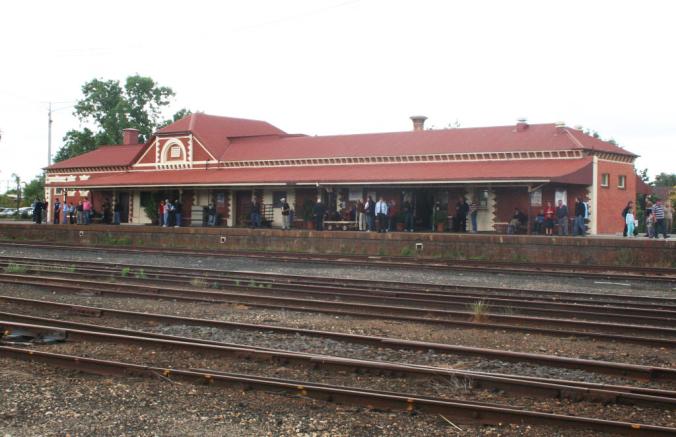 “It’s all right if you’re an historical bod about these things, but if you’re a passenger waiting in the rain or someone working in a cramped hot office it’s not so good,” he said.

“It’s attractive but it’s not really historical at all…it’s just an old railway station which has been here for almost 100 years.” 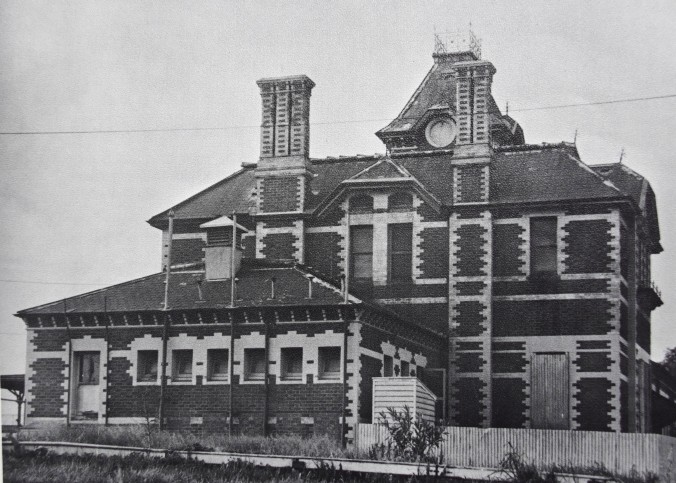 Mr. Pryor said the building had been closed for more than 10 years.

A recent report said it was infested with white ants.

The society has one small consolation-the Victorian Railways has offered it nearly all the station’s internal and external fixtures, to be used in a museum which may be built of Benalla station bricks in the public gardens.

What a staggering attitude – but one very common at the time. It was this attitude that gave free reign to the ‘Whelan the Wreckers’ of the time in demolishing much of our heritage.

At the time, the National Trust was but a fledgling organisation. There was no Victorian Heritage Database. It was open slather.

The building was an extraordinary architectural marvel complete with tower. Gothic in style, it was a striking edifice with fully capped chimneys, polychromic brick bands and curious upper level windows. It appeared to have a mansard roof in slate, high pitched with circular windows in the tower.

This was a building built with purpose, designed to be a landmark for generations to come. Today the demolition would not have got past the architects report.

Contrast that to the vision shown by Maldon couple Kieran and Karen Moy. Moving to a town nominated by the National Trust as ‘Australia’s first notable town’, the Moys showed sensitivity and respect for the town and its heritage by transporting and restoring (although already in fine repair) an original California style bungalow dwelling (which would otherwise have been demolished) from McKinnon to Maldon.

And there’s more to the story.

The recently relocated home with the historic Maldon Dairy in the foreground.

A historic dairy with ties to a renowned Australian philosopher is on the market with a relocated house saved from a developer’s wrecking ball in one of Victoria’s most historic towns.

The milking shed was home to farming equipment built by Romulus Gaita, father of renowned philosopher Raimond Gaita and titular character in his esteemed 1998 book, Romulus, My Father. 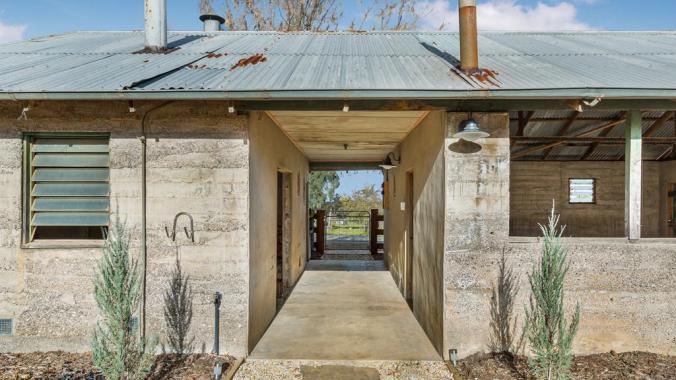 and after they relocated it to Maldon

The vendors recently donated the galvanised steel stalls and cow bails made by the builder to the Maldon Museum.

They sit alongside the motorbike used by actor Eric Bana when he played the title role in the 2007 film version of Romulus, My Father.

The movie was based on Mr Gaita’s 1998 memoir of his childhood at a dilapidated farm in the Maldon region.

Bana travelled to Maldon, dubbed by the National Trust as “Australia’s first notable town”, to shoot the film.

The Moys recently donated equipment used at the dairy to the Maldon Museum. 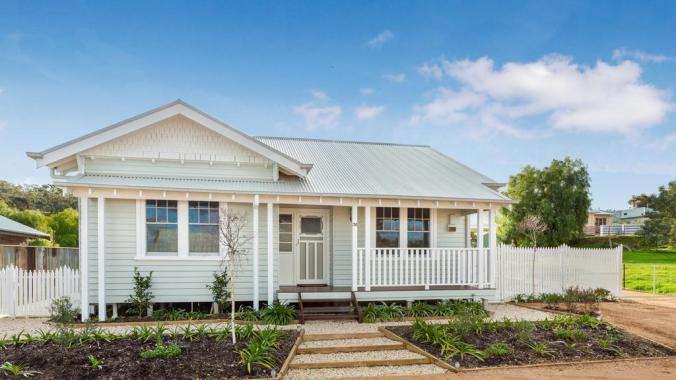 The weatherboard house was moved to the block by vendors Kieran and Karen Moy, who saved it from destruction in McKinnon a few years ago and finalised the move last year.

Controversial plans to build a three-storey apartment block at 2-4 Penang St, McKinnon had locals seeing red and two weatherboard homes in jeopardy of being demolished.

Luckily for residents — who were unhappy to see dramatic changes to the quiet street’s character — Kieran and Karen Moy, both 58, purchased the dwelling and relocated it.

Mr Moy said getting approval to move the house to the town was straightforward because it was in keeping with the style of historic homes in Maldon.

“We couldn’t just build a new house in that area — the old California bungalow fit into the council criteria,” Mr Moy said.

“My wife and I wanted to put a house on a block and we decided we’d look at our options with a house for sale for removal — that’s how we came across the house in McKinnon.”

“When we went down to look at the house to inspect it, we saw all the signs around McKinnon in people’s yards saying, ‘Save Our Neighbourhood’ — we thought it was a bit odd to start with.

“We realised it was developers who had bought the houses to be demolished — we were getting looks from some of the neighbours, so we wandered over and, after talking with them, they were so relieved and happy that we were saving the house.”

Mr Moy said the couple were thrilled with the way the house fit into Maldon’s landscape.

Inside the old dairy, which is now more suited to short-stay accommodation than milking.

The Moys are selling because they have moved interstate.

“I wish we knew the people that owned it — they obviously loved it because it was a beautiful house that was maintained wonderfully,” he said.

“Now that we’ve finished it’s sitting there in Maldon, proud as punch.”

Jellis Craig Castlemaine agent Kate Graham said the dairy, the facade of which could not be altered, had potential to become short-stay accommodation or studio.

“Much of the town has been assiduously preserved, including the old 1954 dairy,” Ms Graham said.

She said the property would suit downsizers and tree-changers alike.

The property is still on the market if anyone is interested.

Heritage is largely an educated perception. Victorian history dates from the 1830s and ’40s when the State was established. The Benalla Station building would now be 146 years old if it had been protected and retained.

There are still too many people out there with the attitude ‘it’s just an old building’. An old building designed and executed by amazing architects, tradesmen and artisans in a fashion no longer practiced in many cases. A gem, an iconic location.

The Victorian State government and local Councils must endeavour to ‘catch up’ again and provide legislation that precludes such travesties ever occurring again. Certainly, these beautiful buildings are eye catching and show extraordinary architecture in stunning detail. But more than that, given the times, the materials involved and the mechanisation of the times, they provide a unique and precious vision of our past and where we have come from. It’s well past time to ensure their protection, maintenance and prominence as integral elements of Victoria’s development as a State. Heritage protection is critical. A timely message would be that “those who neglect the lessons of history are destined to repeat them”. Let’s hope not.