This week we review another 3 grand homes, mansions if you like, in the Essendon district. Again each of these interesting and historic heritage properties were purchased last century with the intent and purpose of providing either educational facilities or accommodation for nuns staffing such schools. Clydebank in Aberfeldie, Rosebank in Strathmore and St Columba’s College in Essendon were all built by very successful businessmen of the early colony of Victoria. 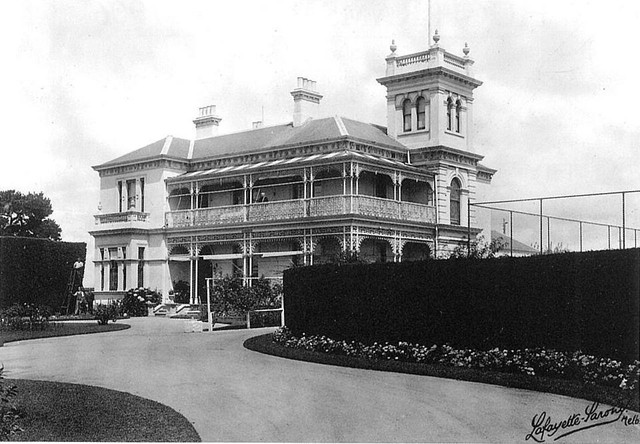 The former mansion Clydebank, now Ave Maria College, was built in 1888 for Congregational lay preacher and land agent, John Ramsay. The stuccoed Italianate residence of two storeys was designed with a slate, hipped-roof, and apart from the two-level return cast iron verandah and parapeted tower, the house displays little that would distinguish it from the many other large metropolitan houses built during Melbourne’s boom years. John Ramsay prospered and his large family pursued successful careers in their chosen domains. Two sons, William and James founded the Kiwi Boot Polish firm, both predeceasing their father who then acted as chairman for the company. Another son, John Ramsay Jnr., became Surgeon Superintendent at Launceston General Hospital and was knighted in 1939. The most celebrated of the sons, Hugh (1877-1906) pursued a short but brilliant career as an artist, prior to his death from tuberculosis at the age of twenty-nine. Many of Hugh Ramsay’s now famous portraits were painted at Clydebank and several of his works continued to grace the building’s walls until
the Catholic Church purchased the property from the Ramsay family in 1943. 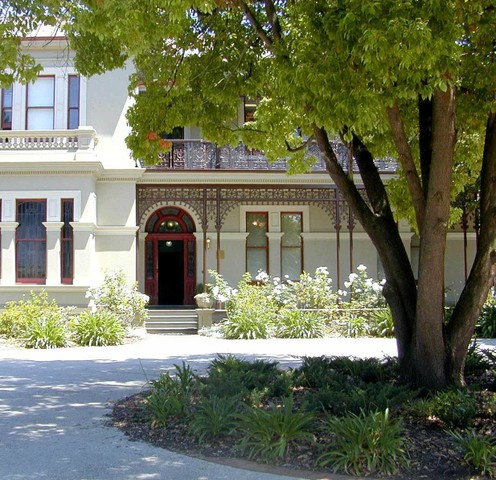 The former mansion Clydebank is of historical importance to the State of Victoria.

The former mansion Clydebank is of historical importance for its association with the life and oeuvre of Hugh Ramsay, one of the nation’s most gifted artists. Ramsay’s response to character and environment and the tonal quality of his paintwork is quite distinct from all other painting of the Edwardian period in Australia.

Clydebank is historically important as the backdrop to most of Hugh Ramsay’s short life; it was here that he established his first studio and painted many of his finest works, and it was here that he died, his career scarcely spanning a decade. Ramsay’s strong attachments to home and family are demonstrated by the many portraits painted at Clydebank of his sisters, with the house and its interior ever-present in the background. That some of these elements can still be identified within the rooms of the former mansion today adds further texture to the interpretation of the artist, the paintings, and the house Hugh Ramsay inhabited. 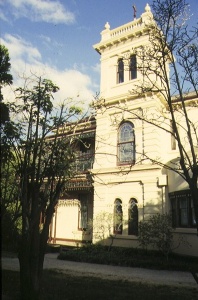 Clydebank was initially surrounded by fifteen acres of land. The north and south fence lines were planted with trees, and at some distance from the house, a line of outbuildings separated the house and formal gardens from the cow and horse paddock. The stuccoed, Italianate mansion of two storeys had a slate, hipped-roof, and apart from the two-level return caste-iron verandah and parapeted tower, the house displayed little external ornamentation. In this respect it was not unlike many of the large metropolitan houses built during Melbourne’s property boom.

The ground floor included many reception rooms, John Ramsay’s study with built-in safe, and bedroom the family referred to as the ‘low bedroom’ or visitor’s room. The drawing room, to the left of the front door, contained a marble fireplace that featured in the background to some of Hugh Ramsay’s family portraits. Behind this room was the dining room containing the onyx mantel where for many years hung the portrait of Jessie Ramsay. Other rooms on this level included a parlour, breakfast room, kitchen, as well as a wash house, scullery and other service rooms. Upstairs there were six bedrooms and a billiard room where paintings by Hugh Ramsay hung until the 1940s. The family bedrooms had access to the very spacious verandah which wrapped around the north east corner of the house, and it is here that three of the Ramsay siblings spent time resting during the last years of their lives. The tower, reached by steep stairs, contained John Ramsay’s telescope. From here could be seen the Macedon Ranges, the Dandenongs and Port Phillip Bay.

At the back of the south west (rear) wing of the house was a room which Hugh Ramsay used as a studio. Above the door was written ‘studio’ together with a painting applied directly onto the wall, entitled The Duellists. Both existed until this section of the house was altered in 1946. After Hugh’s death the studio reverted to its former use of staff bedroom. The north west, single storey wing containing the ironing room, a bootroom and generator room, was completely rebuilt in 1946. 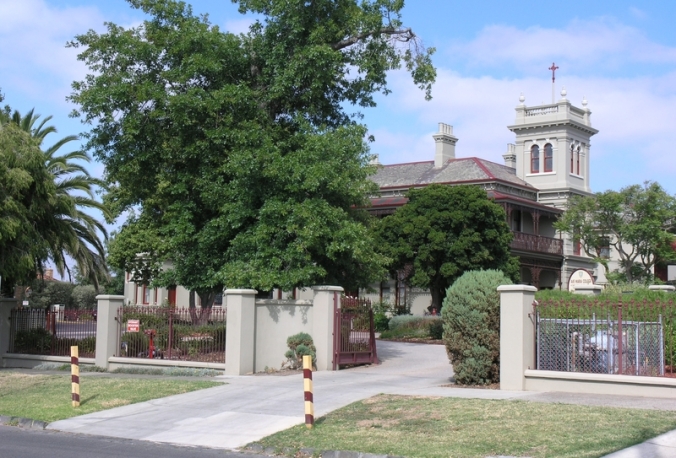 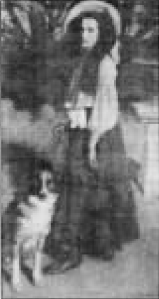 Although considerable additions were made to the house after it was sold to the Roman Catholic Property Trust, many original features remain to help interpret the seemingly gracious late Victorian and Edwardian lifestyle of the Ramsay family, and the paintings of Hugh. The stained glass windows survive on the north and west walls, as does the glass on the front door minus the Ramsay coat of arms. Door handles and panels are still in use. Fireplaces in the bedrooms have been removed. With the exception of the drawing room fireplace, all those on the ground floor remain with their onyx or marble mantels. Many of these formed the backdrop to the famous family portraits painted in the last years of the artist’s life. The hall and verandah tiles, the stairs and ornate newel post show little evidence of their use for over one hundred years. Very little remains of the original garden. The cypresses forming the backdrop to the painting, Jessie with Collie, were removed in the early 1980s because they were diseased. However Clydebank’s rendered front door pillars have been retained, and one of these can be seen in this painting of Jessie.

When Ellen Ramsay died in 1943, the building and its grounds were purchased by the Roman Catholic Trusts Corporation.

The Ave Maria Retreat House (a place for religious contemplation) for women was officially opened in Clydebank on 19 December 1943, by Archbishop Mannix. The first retreat was held over the weekend of 22-24 January 1944 for a group of munition workers. It was run by the Legion of Mary until 1946 and thereafter by the American organisation, the Franciscan Missionaries of Mary, founded in India in 1877. Extensive additions were made to the house in keeping with the original style. On the south side the drawing room was lengthened for the chapel and the Ramsay breakfast room was extended to make a larger dining room. Upstairs the bedrooms were modified to dormitory accommodation. The north west wing became two storeys, and both it and the south west wing were almost doubled in width. Extra bathrooms were included on both levels. A further extension was made in 1958 to provide an enclosed verandah outside the Ramsay breakfast room.

Rosebank House also has an interesting and varied history. It was originally built for Thomas Napier, the earliest European resident of Strathmore. The original house was built on what became known as Napier Hill in 1845. Napier lived there all his life. When he died in 1881, the property passed to his wife Jessie and surviving son Theodore. 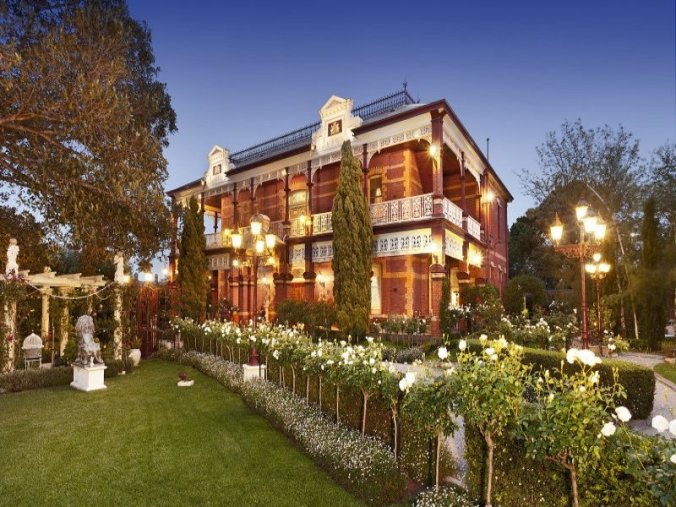 It was about this time the original house was badly damaged by fire. The current house was built at around this time.

The second Rosebank House was a large two storey brick house with a wide verandah and balcony and a rooftop lookout. Iron lace work adorns the verandah, the balcony and rooftop lookout. Inside the house the main feature is the beautiful wide timber staircase. Many of the rooms have ornate fireplaces of marble or wood, some with inset hand painted tiles with rural scenes. The house also has a number of beautiful stained glass windows.

Eleanor Barber died in 1902 and her husband George died in August 1914. Because of the First World War and the scattering of the family immediate sale of the property was not possible.The furniture was stacked away, the house locked up and a caretaker put in charge. George’s son, Dr Norman Barber visited the house in 1917 he discovered that the house had fallen into some disrepair. 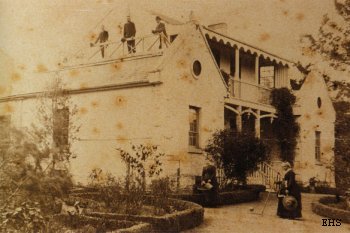 When the war finished a plan of subdivision was prepared dividing the Rosebank property into 63 housing blocks, and 17 shop sites facing Woodland St and the railway line. The Rosebank house together with 2 acres of land was offered separately. An auction sale was was held in November, 1920. The price of the residential blocks was advertised as around 3 pounds each.

“Rosebank” house was purchased by the Catholic Columban mission in 1923 and is now a convent of the Sisters of Charity. Restoration work was performed on the house in the early 1990’s and the house is in excellent condition internally and externally. 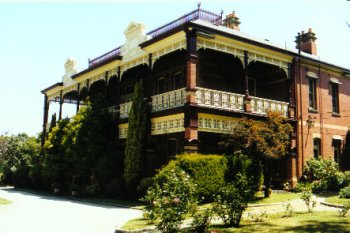 The Victorian Heritage Database ‘Statement of Significance’ is as follows

Architecturally, an externally original, successfully designed and richly ornamented house which follows the Medieval revival, illustrating its influence on established Italianate forms of that period, and possessed unusually formed and applied details; also it is the subject of distant views which include the related North Park mansion and clearly identifiable as prior to the surrounding residential subdivision; of state importance.

A two-storeyed polychrome brick and stucco house with a two-level return verandah, constructed on masonry piers with iron intermediate supports.

Atypically, the verandah extends under a high hipped and slated roof, whilst the roof, itself supports a lookout with cast iron balustrading. Further unusual details include the two gabled and raised entablatures which are placed over the verandah bressumer, flanked by scrolled brackets, and a coved eaves treatment which extends around the house. The verandah has panelled iron friezework and balustrading, enriched by rosettes, and tapered iron columns of and unusual pattern. Beneath the verandah, bay windows, with cream brick quoining and voussoirs, create a varied elevation at both levels, whilst central to the ground floor verandah, is a gabled pediment resting on brick piers. Exotic planting (of a later date) and gravel paving are sympathetic to the house.

It’s an interesting situation. These homes all now sit in relative obscurity. Yet they are the foundations of the areas of Essendon, Strathmore and beyond.

The last property for consideration is a mansion built between Buckley St and Leslie Rd Essendon by successful Flour Miller Mr Alexander Gillespie. Mr Gillespie built his extravagant Italian Renaissance style home in 1882. Not much is recorded of his situation other than he was a very wealthy man who like others of the time was severely impacted by the economic crash of the 1890s. In 1896 he was forced to sell his home to cover crushing debts. The Sisters of Charity purchased the estate. St Columba’s Girls School commenced classes in 1897 with 47 students.

The Sisters of Charity, an Irish order, made many canny purchases in the 1890s and early 1900s. The buildings have stood the test of time and remain largely intact as they stood at the time of their sales, with some clumsy ‘improvements’ detracting form the overall effect. 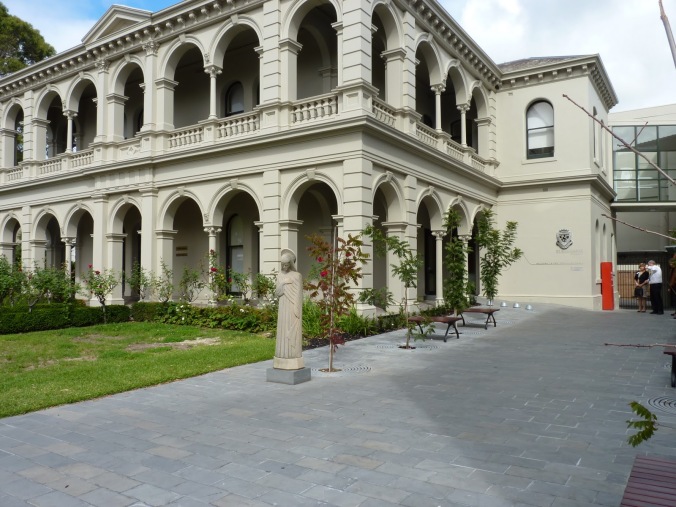 The Essendon and Flemington areas are rich in heritage values with a large number of original homes dating back to the early settlement of the area. Our principal Architect Andrew Fedorowicz knows the area and its heritage well. As such he has re-developed many properties sympathetically, winning awards along the way. For further information on Balance Architecture’s services or to make an appointment for a free consultation, please click here. Alternatively you can call the number listed on our Facebook page – 0418 341 443.

One thought on “Heritage in Essendon – Clydebank, Rosebank and St Columba’s College – The Beginning.”